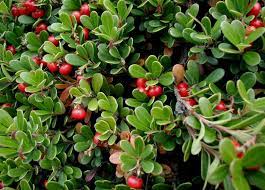 Also known as Bearberry, Kinnikinnick is an Algonquin word meaning “smoking mixture” as the dry leaves and bark have been smoked as a standalone, or with a mixture of other herbs by Native Americans. This woody mat-forming evergreen shrub has leaves that change from dark green to reddish-green and eventually turning purple with a pale underside in the winter. The small, shiny, and stiff leaves remain on the shrub for 1-2 years before drying, falling, and beginning anew. In late-spring small pinkish-white, urn-shaped flowers bloom on the Kinnikinnick eventually turning into the shrubs’ round, fleshy bright red to pink fruit. The berries, while not very palatable, and leaves of Kinnikinnick have been used throughout time and across the world by folk healers as a diuretic in the treatment and prevention of kidney disease and urinary tract infections.

However, Kinnickinnick should not be ingested in high doses as it has been known to cause allergic reactions when taken in large quantities, additionally people with liver or kidney disease, and pregnant or nursing individuals should refrain from ingestion.

*Prefers infertile, sandy acidic soil, but is tolerant of diverse soils as long as not overly fertile

*Suitable for slopes, as an ornamental plant, in rock and rain gardens, along rocky coastlines, as an urban or garden evergreen groundcover, and as a control for soil erosion.

*Sold as a plug

*Sold in bundles of 5

Sold out
Add to Cart